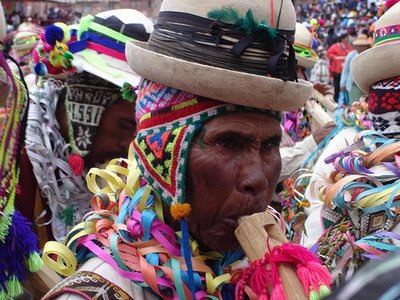 In the Aymara people of Bolivia, the main festivity of the work concluded and the blooming of the potato fields sown in Anata (Amusement) or in the Andean carnival and the main musical instrument is tarqa.The tarqa is built out of a wood called Largo, in three measurements, the licu or tayca, which is the longest or the biggest; the mala or malta is of medium size; the ch'ili is the smallest; the percussion instrument are the bass drum and the drums.The tarqa is an instrument that they begin to play on November 2, after rendering homage to the dead and ancestors, in the event that is called deburying of the t arqa; its playing as a musical instrument usually ends on the Temptation Sunday in some places, but in very few places, its playing continues until Easter or the beginning of harvest time.The tarqa is an instrument in which its melodies it receives from nature, to beg for clemency from this same nature vis-à-vis the droughts, the excessive rain drops or any other climate phenomenon that may affect the crops. Finally, it is with this instrument that they celebrate the Anata or the amusement of the promise of a good harvest that is announced by the blooming of the sown fields of potato.The dancers after pijchar (chewing coca leaf) a little of coca leaf and chállar (dropping alcohol down for benediction) his house, his crops, and animals with alcohol, capture euphoria and in a common way in a single and amorphous group of men and women the fiesta (party) starts where nobody stands out neither more nor less, where at the rhythm of the tarqa that Andean fiesta is made so different in its motivations and beliefs."In this carnival my tarqa says to the nature, thanks for giving food, garment and the happiness of living".The tarqa is played in the celebration of Marka Qullo, to ask the nature the drops of rain vis-à-vis the drought or any other climate phenomenon that affects the crops. Then in the occasion of the investiture of the authorities as it is played and danced at the delivery of the authority baton to the jilacata, recognizing the merits of the cycle of command that finishes. It is also played on Christmas, New Year, family feast, the co- mothers and co-fathers day, reaching in this way the feast of Candelaria on February 2, where, in some of the places, this feast means a feast of the new potato breeding, when the aymaras would dig out the potato sown fields to see how the produce is developing and thus present offerings to Pachamama and the spirits.The dance of this instrument is the "tarqueada" it is danced in the main feast when the blooming of the sown fields is celebrated which is in Anata or Andean Carnival, when the happiness enjoyment and games are manifest, a real manifestation of a celebration and the beginning of the period of harvest. During the festivity of carnival a ceremony that is of the Challaku is performed, a custom of spilling Llumpaga or Chicha with a Ch'rea (a half an orange shaped mungler) to the four cardinal points as an offering or invitation to Pachamama, linked to the celebration with a cult to fertility.For the Anata, the community prepares a "tarqueada", a new melody is inspired in the wrinchaya, and diacahcu with the ceremony of the "sereno" man receives from nature that new melody with which he will beg for good crops, settling a close relation with the Pachamama.On carnival day, after chewing the coca leaf and throwing benediction with alcohol on houses, crop fields, and on animals, the feast continues with the participation of all communities ayllus. The dancers and the musicians accompany the pasantes (the feast offers) at the tune of the tarqas with the groups of men and women with whom the temptation days were passed and the cacharpaya (leave-taking); the playing of the music by tarqa may last, in some communities, until Saturday day before Easter or the beginning of harvest time.
Email ThisBlogThis!Share to TwitterShare to FacebookShare to Pinterest
Newer Post Older Post Home